A Case for Getting Games Recognized for Story Telling Excellence

Video games are often ridiculed as low forms of entertainment by mainstream media, older generations, and those who have never played them. The first thing that comes to mind for them is the mindless zombification of a child obsessed with something they do not see the appeal of. However, video games are not only a valid form of entertainment, but a story telling medium capable of a narrative that rivals all others.

While games are mostly revered for their gameplay and technical prowess, the directive style should not be underestimated. The interactive element of games allows for a degree of investment and directive flexibility. In a decent game, players can feel submersed into being the character they control. With modern technology, video games are every bit as capable as television and cinema in sound, art direction, voice acting, and other narrative tools. Recent video games make the case that their medium should be as recognized for its story telling as much as other media.

Assassin’s Creed is a historical fiction game that takes place in the Holy Land during the Third Crusade following a member of the Assassin’s Brotherhood, Altaïr. In the game, players are modern day bartender Desmond Miles being forced by a seemingly malevolent organization to access the memories of his ancestor, Altaïr, through the use of a machine called the Animus. The open world environment that gamers experience is cinematically majestic and detailed, especially in Jerusalem. Assassin’s Creed gives life and an authentic feel to the city that would be nearly impossible to create in a two hour movie. As the game progresses through Altaïr’s trials against the Knights Templar, it becomes increasingly morally gray. The conflict over the “Piece of Eden” artifact leads to questions about religion and government that cannot be easily answered. The final boss battle itself becomes largely a philosophical debate, both sides of which are relatable and understandable. In fact, it is comparable to the great conversation in Brave New World with the supreme ruler. The story of Assassin’s Creed has since lived on in 4 sequels, a line of novels and graphic novels, and Sony is reportedly pursuing to make a film version. For its seamless dive into the mysterious history of the Third Crusade, art direction, and the moral questions it raises, Assassin’s Creed exemplifies the greatest of its style of video game story telling. 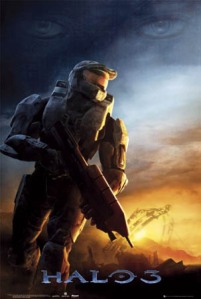 The Halo Trilogy is a science fiction video game series following humanity’s war against a theocratic alien alliance known as the Covenant. In the year 2525, the Covenant declares the human race an affront to their gods and launches a genocidal campaign. After the fall of the Reach stronghold, players assume the role of a “Spartan” super soldier, John-117 (otherwise known as Master Chief) throughout firefights across linear stages. 117 is a man of few words, and he shows sparse amounts of emotion that never gets in the way of his directives. His background as an augmented soldier makes him the perfect allegory as a weapon of war mostly striped of his humanity. Yet he is as necessary as he is unbeatable in a shootout. During the first Halo game, it is 117’s mission to stop the Covenant from activating an ancient super weapon (created by the now-extinct Forerunners) called the Halo ring, which would exterminate all sentient life. The Covenant believe that invoking the power of a Halo ring will bring about their divine “Great Journey,” when it’s true purpose was to eradicate an unstoppable parasitic species known as the Flood –which kills and controls the bodies of sentient life forms.  The pursuit of “Great Journey” is symbolic of cult delusion in which death heralds transcendence.  In the sequel, the players assume the role of a Covenant combatant, the Arbiter, in addition to John-117. This direction really helps gamers understand the ignorant Covenant and their fanaticism. The Halo Trilogy concerns grand themes that have roots in World War II, but from a new perspective. It exemplifies the necessity of war and the importance of reason above zealous faith. In essence, John-117 shows the importance of a mechanistic society over theocracy. Yet it also shows with the Arbiter that people can be victims of circumstantial ignorance. The Halo franchise has not only spawned 8 games with 2 more planned, but is complimented by a series of novels, graphic novels, and an anime miniseries. Halo shows that video games are capable of creating an expansive universe that not only rivals the Star Wars and Star Trek franchises, but is highly symbolic and takes on deep themes.

Possibly the best direct example of a video game’s story outshining cinema is the Star Wars franchise’s The Force Unleashed. In this game, players are the Sith Lord Darth Vader’s secret apprentice, Galen Marek (codenamed “Starkiller” by Vader). An anomaly in the Force, Marek’s power far outweighs what audiences have seen in any movie with spectacular theatrics such as the taking down of a star destroyer Imperial ship. Marek is instructed by Vader to unify those with anti-Imperial sentiment to serve as a distraction in a plot to ultimately overthrow Emperor Palpatine and to rule alongside one another. The end result of this effort is the formation of the Rebel Alliance. The Force Unleashed is a fantastic story which showcases evil’s self-defeating nature. The confused nature of Darth Vader seen in the Star Wars prequel trilogy is ever present, as it is never quite clear how loyal he is to Palpatine, yet he is always in character. The progression of Galen Marek’s moral ambiguity acts like the reverse of Anakin Skywalker’s descent into darkness, and it is extremely gripping seeing how it plays out. This video game not only matches the best of the Star Wars movies, but arguably surpasses them in almost every aspect. It raises the bar on plot, complexity of characters, intensity, entertainment, and strength of themes.

These video games show that their medium can compete with the stories of cinema, television and novels.  Such stories are so captivating that they are bleeding into novels, animation, and many others like Prince of Persia and Resident Evil get film adaptations, if not always successfully. These representatives show that video games effectively tell stories that exist in history, new creative worlds, and in universes previously realized by other media. Therefore, the video game medium should not be discounted as a form of story-telling, deserving a similar level of recognition and respect as other forms.